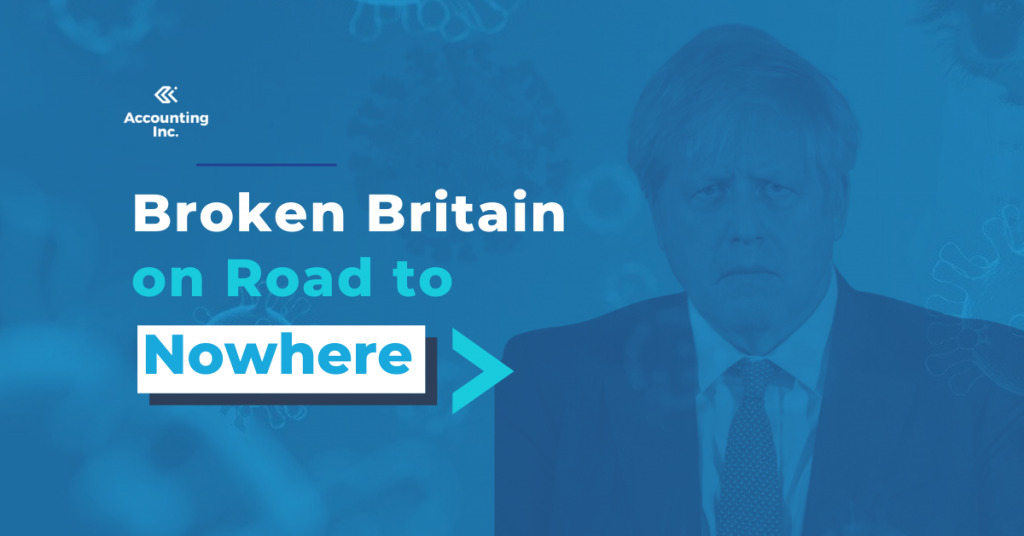 It was the nightmare on Downing Street when Prime Minister Boris Johnson announced a new national lockdown on Halloween. Another kick in the teeth for many business owners and the people of England.

My initial frustration has now turned to disappointment. Boris Johnson has clearly succumb to pressure from Messrs Whitty and Valance. In addition to increasing pressure from his rival parties. Labour leader, Sir Keir Starmer, clearly jumped on the chance to use Johnson’s apparent reluctance to follow the SAGE advice of another national lockdown in September as political leverage.

I’m no Tory worshiper. However, I did think in the early day’s Johnson and Co. were copping a lot of undeserved flak. These are unprecedented times and making decisions which balance health, wealth and welfare will be incredibly difficult. That being said 8 months down the line I think most people would say the government has handled the crisis rather poorly.

Following Saturday’s lockdown announcement I think Boris Johnson has now lost the dressing room. I’ve been rooting for him to stick to his guns and show strong leadership. Instead, we got what appeared to be a broken man. Who reluctantly feels he has no choice but to enforce the harshest lockdown measures in an attempt to reduce the spread of Covid-19.

I don’t believe this is what Johnson wanted. Rather his hand was forced by the doomsday scenario painted by the Chief Medical Officer Professor Chris Whitty and the Chief Scientific Advisor Sir Patrick Vallance. When I said the government copped a lot of unnecessary flak earlier. I was meaning at the expense of these two and the Scientific Advisory Group for Emergencies (SAGE). No not the accountancy software firm.

Disgraced Professor Neil Ferguson quit SAGE in May after flouting lockdown rules with his Misstress. Ferguson also predicted we would see over 500,000 Covid deaths.

Of course, the PM has been following the advice of his scientific and medical advisors from the get-go. Whitty and Vallance didn’t lock down initially as they flirted with herd immunity. They then u-turned and put us into a national lockdown on March 23rd.

Whitty and Vallance appear to have tunnel vision. Focusing on suppressing the virus. Not that I’m blaming then. After all, that’s their job. Whereas Boris Johnson is desperately trying to balance protecting lives, livelihoods, businesses and jobs. Also trying to keep people on board with the restrictions.

On Halloween Whitty and Vallance delivered their second round of scaremongering tactics. Previously, on 21 September Sir Patrick Vallance announced the UK could see “50,000 new coronavirus cases a day by mid-October” without further action. Vallance said that would be expected to lead to about “200-plus deaths per day” a month after that. The prediction of daily death seems plausible. However, we are nowhere near the estimated daily cases. Under his modelling, we would surely be seeing 75,000 to 100,000 cases per day.

Then on Saturday professors grim attempted to justify the latest lockdown measures by delivering further scaremongering tactics. Projecting “4,000 deaths a day”. Using selective data in a bid to put the nation into fear and accept the second national lockdown. Professor Chris Whitty and Sir Patrick Vallance have now admitted the data which they used on Saturday is 3 weeks out of date. And based on data from 29 ‘select’ hospitals out of a total of 482. With the objective to scare the public in order to behave.

It should also be known that Sir Patrick has a £600,000 shareholding in a drugs company contracted to develop a Covid-19 vaccine for the Government. He could make millions off the development of a successful vaccine. #justsaying

Thank you Mrs May

Yesterday in the Commons Mrs May accused Mr Johnson’s government (her own party) of “picking data to fit his coronavirus policies”. She said: “It appears the decision to go towards this lockdown was partly, mainly, to some extent based on the prediction of 4,000 deaths a day.” “Yet if you look at the trajectory showing in that graph that went to 4,000 deaths a day, we would have reached 1,000 deaths a day by the end of October.” “For many people, it looks as if the figures are chosen to support the policy rather than the policy being based on the figures,” she said.

The people of the United Kingdom deserve answers. How will another lockdown impact businesses and jobs? Mental health and other illnesses such as cancer treatments, heart and other respiratory diseases?

Where is the research modelling the collateral damage of locking down a nation to suppress a virus which has a recovery rate of over 96%? With the average age of death 82.

Another lockdown, but at what cost?

I believe Boris Johnson was right to stick to his local, targeted, proportionate measures. How does locking down parts of Devon where the infection rate is extremely low, stop the spread of the virus in the North West? The World Health Organisation has said, “National lockdowns are absolutely the last resort.” If the media wasn’t pushing Coronavirus everyday would you even know about it? My condolences if your friends and family have been touched by Covid.

Let’s be clear the Covid-19 pandemic has been the best thing to happen to the media in decades. People are glued to news channels, buying newspapers and listening to the radio to keep up with the latest developments on Covid-19. Desperate to know-how developments will affect their lives.

This new lockdown will cost billions to the Treasury. Which they will look to recover with changes to the UK tax system. I’ve never been a fan of Rishi Sunak’s furlough scheme, which may surprise you. I do think it was the correct option during the first lockdown, however. The Chancellor has reiterated that he wants to “save viable jobs”. My assessment of this is he wants to protect large and medium-sized companies. Where he can recover taxes to repay the COVID debt. Pushing self-employed and freelancers into employment and the PAYE system.

The furlough scheme could be considered to be kicking the can down the road? Protecting jobs which may disappear when the government funding inevitably runs out. Therefore the furlough scheme isn’t the best solution in my opinion. Instead, we should be protecting viable businesses. Not paying workers to sit at home only to lose their job in the coming months. Make changes to the welfare system to adequately support people who have lost their job or suffering from a loss in earnings.

The treasury’s funds would be better suited to top up ‘profits’ of viable businesses. An injection of cash to cover lost revenues and profits due to the impact of the coronavirus. The Chancellor seems to have overlooked the other operating costs of running a business. Such as stock, rent, rates, advertising, vehicle expenses and professional fees. It’s no good covering wages if a business can’t pay its rent or buy stock to sell.

It would be difficult to identify declining profits, but not impossible. Had the next stage of Making Tax Digital (MTD) been up and running. Whereby businesses report on quarterly profits to HMRC this would have made claims easier and less susceptible to fraud.

The Chancellor will argue the Bounceback Loan and Coronavirus Businesses Interruption Loan Schemes in addition to the local authority grants will contribute to working capital. With many businesses already in debt these schemes have helped, but aren’t enough. Are we just kicking the can down the road?

My prediction is Boris Johnson will take England out of lockdown on December 2 as planned. Boosting the retail and hospitality sectors in the run-up to Christmas. We’ll likely then go back into another national lockdown in January and February before returning to the tier system in March.

If you would like to discuss how the latest restrictions may effect your business. Or like further details on how professional services consultants in Newcastle are supporting businesses to survive and thrive during these difficult times please click below and contact us.

We'll get to know each other and discuss how we can benefit your small business in Newcastle.

What is a discovery call? Well, this is an introduction we will discuss where you are at in your business journey, and what is perhaps stopping you from getting where you want to be, and more importantly how we can help you get there!
Arrange here

Ready to be our next client ?

You are more than welcome to leave your contact info and we will get back to you right away.